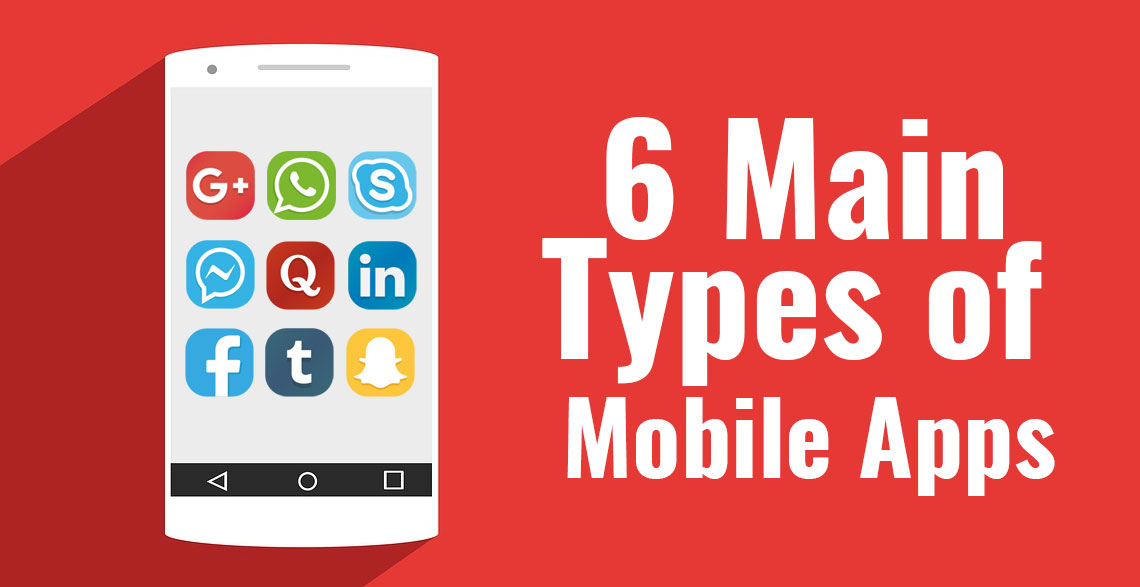 6 Main Types of Mobile Apps a Developer Must Know About

If you’re in mobile app development, you must be aware of the fact that the marketplace is crowded with a wide variety of mobile apps listed under a vast array of categories. These categories further have sub-categories which makes it easy for users to find their desired app quickly. Hence, selecting the most accurate and effective category for your mobile app not only increase its discoverability on the app store but also clearly indicates users what purpose the app has been built for.

At the time of this writing, there are currently 32 app categories on the Google Play Store and 24 on the Apple App Store, as well as several subcategories that were introduced after the release of iOS 8. While this might sound a bit overwhelming to you at first, all these categories can neatly be narrowed down to 6 main different types of mobile apps. Read on to know what they are and determine yourself which category your mobile app actually falls into!

Top among the most common types of mobile apps, the purpose of educational and informative apps is pretty straightforward – to provide users with fresh, informative and relevant content they’re looking for in an easy to understand and browse layout. These apps are typically used by media and publishing companies to keep their users up-to-date with the latest news and updates from across the globe. In other words, these apps are generally news apps. Some great examples of different types of news apps are:

Depending on the type and its purpose, an informative app can also sometimes be educational – look at TED and Wikipedia apps which are both informative and educational. Essentially, if you’re planning to develop an educational or informative app, you’ll have to create something unique to deliver users the same news in a totally different manner.

Mobile apps that enable users to solve a problem or accomplish a specific task quickly and efficiently fall into this category. Built to serve a single purpose or functionality, many of these apps come pre-installed with a device out of the box and are quite difficult to remove from the device. Needless to say that every one of us uses them on a regular basis without even realizing we’re using them. Some exact examples of utility and productivity app are,

However, as compared to other types of mobile apps, these apps are used more often (typically 5-6 times a week) but for relatively shorter periods of time. People apparently use them just to perform a specific task and then move on in a matter of seconds. Hence, your primary goal while developing such an app should be to increase the frequency of use so you can successfully monetize it.

Apps that provide single or multi-user interactive activities to entertain users through the audio, visual, or another type of content come under this category. Since the beginning of the mobile era, these types of mobile apps have always been a favorite among developers as they are fully capable of keeping users engaged for a long period of time as well as bringing them back multiple times a day. Despite being big time-wasters, they are hugely popular and the most frequently downloaded apps. Some well-known examples of gaming and entertainment apps are:

When building such kind of apps, two most vital things you must keep in mind are aggravation and engagement. Try to make your as sophisticated and addictive as possible. Given that an average gaming session is about ten minutes long, developing apps for this category can prove a profitable deal for you.

Multiple types of mobile apps, ranging from fitness to travel to cooking, can be put under this broad category. These are apps that are designed to fulfill the needs of a specific user audience. Empowering users to deal with their everyday problems, these apps make their everyday life much easier as well as simplify their overall lifestyle to a great extent. Examples of popular lifestyle apps are:

Since these applications are built on the basis of common human activities and interests, they require a lot of creativity and technical innovation. If you’re developing a lifestyle app, make sure to come up with something that wows your users, something that nobody else ever built and something that users just can’t imagine their life without.

Can anyone live without social media today? Should one? Obviously, the answer would be a BIG No. Social media and communication apps are arguably one of the most popular types of mobile apps available today. Even, apps that don’t necessarily fall into this category are now including social media as core functionality. For example, let’s look at these two popular apps:

Apart from mainstream social networks like Facebook, Twitter, Instagram, Snapchat, etc, dating apps such as Tinder and Twoo also come under this category since they connect people to each other by means of voice, video, text, or image. Such apps are quite difficult to develop for a solo developer and require a lot of planning and imagination even for a team of expert developers.

Mobile apps that allow users to perform financial transactions or making an online purchase fall under this category. These are apps related to eCommerce, mobile banking, insurance, money management, mobile wallet, tax management, etc. Below listed are a few examples of popular business and eCommerce apps:

Unlike other types of mobile apps on this list, these apps need to be as fast and secure as possible. As any security breach in such apps can put users’ hard-earned money at risk within a matter of seconds, be extremely careful about the security while working with these apps.

Hopefully, you’ll find this article useful and informative. If you have any query or question related to mobile app development, feel free to reach us via our contact page.